State of the art

The aim of the project is to capture the dynamic, conditional path deviations of large machine tools (WZM) and robots. These are to be detected by means of laser trackers for calibration and compensation of position error in kinematic mode. Due to the dynamic effects of the WZM and robots, this determination cannot take place at a standstill.

In this project, a model should be developed for the determination of measurement uncertainties that are continuously captured with laser trackers. This requires, among others, the inspection system Ti4CalibS (Time-referenced 4D test and Calibration System) to be used and further developed.

In cooperation with the Laboratory for Machine Tools and Production Engineering (WZL) in Aachen, a model for the evaluation of static measurements using the Monte Carlo method has been developed. This model is based on ray tracing and takes environmental influences into account. It is evaluated by comparing measurements against a multilateration coordinate measuring machine (KMG), which consists of four laser tracers. It is then extended with additional parameters to account for kinematic effects.

The determination of uncertainty is continuously detected in robot track trajectories. Moreover, it is made by the statistical properties of the robot's motion and the laser tracker. For the evaluation of a trajectory simultaneously observed with multiple trackers (see illustration) the time delay between the trackers must be known. In order to estimate this time delay, an alternative evaluation model for the system Ti4CalibS (Time-referenced 4D test and Calibration System) has been developed.

The project falls within the Kinematic surveying research area and is entitled "Determination of measurement uncertainty with laser trackers in recognized trajectories for the dynamic calibration movements of robots and large machine tools”. It is funded by the DFG (German Research Foundation, HE 5213/4-1). The processing of the project is carried out in collaboration with the Laboratory for Machine Tools and Production Engineering (WZL) of the RWTH Aachen University, where the task for the iGPS measurement means is processed. 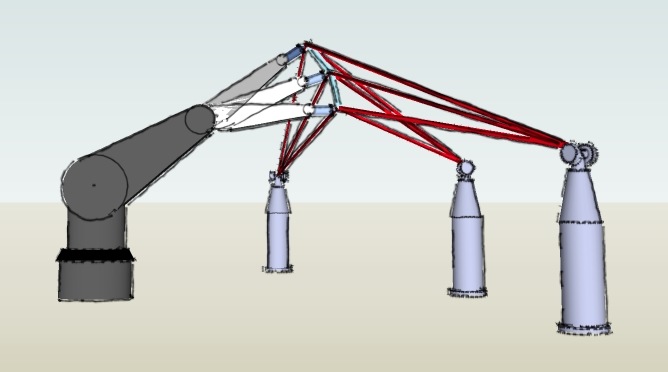